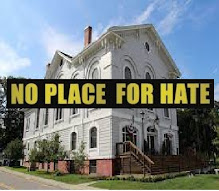 After a spate of hate speech incidents at the middle and high schools, residents are banding together to demand answers and action. Over the past several weeks, hate speech based on race, religion, and gender identity/sexual orientation has been discovered in various locations at both schools.
School and district personnel have responded with whole-school lessons and by soliciting student and parent involvement in ongoing anti-hate programming. Yet, many families and residents wonder if enough is being done to identify the perpetrators and implement effective restorative justice.

Concerned citizens have organized a peaceful gathering to denounce hate in all forms in Holliston. The Enough Is Enough rally will be held at 3 pm this Thursday, November 11, at Holliston Town Hall. Learn more and pledge to attend at the Enough Is Enough Facebook Page. We strongly encourage HDTC members and supporters to attend and make it clear that hate has no home in Holliston.

You may also wish to join Diverse Holliston, a Facebook group dedicated to fighting discrimination in all forms in our town, our state, and beyond.
at 3:27 PM